A Breed By Any Other Name Would Smell as Sweet

Pit Bull: n., a thing that is aggressive, strong, powerful** 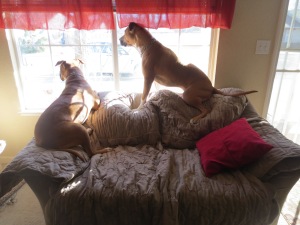 Every time my family drives down to visit family that lives in the Sacramento, CA area our car passes a fold-out sign left on a street corner to advertise for some local gym. What initially drew me to this sign, as oppose to all the others you can find around an urban town, is the design that encompasses the entire front side. In place of a spokesperson for the gym is the dark and angry face of a Pit Bull. Seriously, his eyes are black and downcast, with an ugly frown on his face, and his entire face is placed in shadow.

Now, I get the meaning. Gyms are indicative of strength, aggression, and power. A Pit Bull is often portrayed in popular media with the same connotations, represented as a thing that is inherently aggressive, strong, and powerful, and is such for all the wrong reasons.

Buy why couldn’t this gym use a German Shepherd to portray strength and power? Many dogs of this breed are trained to attack as police dogs, trained to be dominant and commanding. Or how about a gorilla? A mythological-looking dragon (because they’re pretty popular right now)? A Megalodon shark (because they totally exist, just like mermaids do!)?

Nope. They had to use a Pit Bull, because this breed is so intrinsically entrenched in society that their mere mug stands for aggression and power, though always with a negative tinge. The fact is in our society the face of a Pit Bull is undeniably linked to all things bad, like dog attacks, biting, dog fighting rings, and just plain terribleness. There has been pushback, obviously, as people who love and understand the breed work to correct society’s mistake, but we haven’t quite overcome the negativity yet in order to use the term in such an unbiased and non-indicative way, so that this gym’s representation only furthers the negative stereotypes that the Pit Bull carries, whether it meant to or not.

Pit Bull: adj., a person or thing that is demonstrating signs of aggression, strength, power** 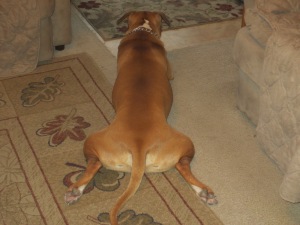 Recently reading this open letter a mother had written in answer to yet another great debate online, I was captivated by a particular line in which this woman labeled herself as a “Pit Bull mother.” Apparently, this woman’s children refer to her as such when she becomes increasingly overprotective and aggressive. While I find nothing wrong with defending one’s family and way of life, this use of Pit Bull as some sort of describing word left me with feelings of negativity and regret. Why couldn’t she write that she is a Lioness? A Tigress? A Bear mother? A Velociraptor? (Jurassic Park anyone?) No, she had to write Pit Bull, because of course these are the only animals that are naturally aggressive and mean.

Certainly, nobody uses Pit Bull to describe a person being cuddly or cute do they? (And I am referring to someone who does not love and understand the breed, because of course those who do would.) No. Pit Bull is clearly reserved for describing those meant to be naturally aggressive, strong, and powerful. The writer of this open letter used Pit Bull to get her point across that she will “attack” when necessary, and though she meant in defense of her family, her usage instead brings up stereotypical images of Pit Bulls attacking and fighting, because obviously that is what this woman believes Pit Bulls are only capable of. Her wording, unfortunately, relies on these hurtful negative stereotypes in order to let her audience know just how vehement she is in taking care of her family. So, while I understand her meaning, I still consider her usage to be a bit irresponsible.

What I do know is what I see and what I feel when I look at signs or read letters that use the Pit Bull to make a statement. I know that reading someone call herself a “Pit Bull mother” is saddening to me because my little girl Rosee is not inherently aggressive. Rosee does not rise to the defense of others because it is in her nature to be mean and powerful. She becomes loud because she’s scared. She’s so anxious and nervous about the world around her that she decides to act mean (by barking loudly mostly) before anyone else (dog or human alike) can be mean to her. She’s dutifully working on accepting the world, on trusting those who inhabit it, but it is a process. She’s no angel, but she’s certainly working her way up to it. 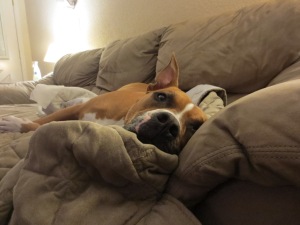 I know that Simon can look aggressive and intimidating (all 75 lbs. of him), and can sound larger than life (his bark is pretty deep), but he’s one of the happiest dogs you’ll ever meet. He has no mind space for negativity and meanness, only room for playing tactics and walking routes. His handsome mug on a gym’s sign would probably draw customers that were excited and playful, simply looking to have fun and I guess that would be bad for business. 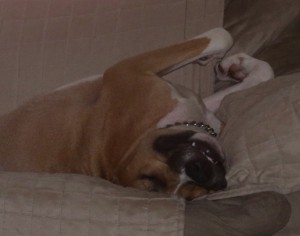 I know my two are not the only dogs in the world that defy the negative Pit Bull stereotypes. All I have to do to remind myself is walk around my neighborhood, read stories online, or watch television shows. I am reminded that my two pups are not the exception, rather they are the rule. They represent the larger group of Pit Bulls that exist in the world that are happy, healthy dogs. They represent every dog in general who is happy and healthy, and those that are still working their way there as well.

So, I guess my point is until Pit Bull stands equally for strength and cuddliness let’s pledge to use the term responsibly, or at least in its natural form, i.e. to describe the Staffordshire Bull Terrier, the American Staffordshire Terrier, and the American Pit Bull Terrier. Let’s pledge that Pit Bull is no different from Golden Retriever, Labrador, or even Chihuahua. It is just a name given to three similar breeds of dogs. It is a nickname, a moniker, a category. When we hear or read stories about dog attacks or dog fights let’s focus less on the breed of a dog, whether it is a Pit Bull, and more on why such things even happened. Let’s not give into popular media’s negativity towards Pit Bulls or any other breed for that matter, because the media is just looking for a story to glom onto, nothing more. And while a certain breed might lean towards some characteristics or personality traits more than others, nothing is set in stone. I’ve met Golden Retrievers who want nothing to do with humans even though this breed is known for being people-pleasers. I’ve known German Shepherds that only want to lie around on the couch, instead of being active and dominant dogs. I’ve met Labs, who are always believed to be super friendly and gentle, that are mean and pushy instead. The fact is breed means less. I believe that with dogs it is very much a nurture over nature situation. Pit Bull is just a name, it is the way one is raised that makes all the difference.

**Created from popular perceptions portrayed in the media and experienced by this author in real life.