If we’re not careful they’ll learn to take over the world.

Or maybe he’ll be content with his own back massager.

It’s finally here. The second part of my compilation of tips on loose leash walking.So, here is Part 2, which focuses on three main methods I’ve learned and used with Simon and Rosee.

In general, I know that the command “heel” is the common way to teach a dog to not pull and walk beside their person on a leash. However, I am not exactly a fan of “heel” because I feel that it’s not a permanent solution. (That didn’t make much sense did it?) What I mean by this is that with any command there must be a release from said command at some point, and when walking my dog I want their behavior to be more natural and to not have to rely on a command. Don’t get me wrong, I did use “heel” at first with Simon when he was a puppy, but frankly it was frustrating to have to continually tell him to “heel” when we went on a walk. We have since tried other methods.

Before I start though, I have a confession to make: I am not strict when it comes to making my dog walk right beside me, at least when it comes to Simon. Let me qualify that. With Rosee I have come to learn that it’s important to keep her close to me and not let her walk ahead due to her anxiety and fear issues. By keeping her close I’m more aware of when she starts to become upset and stop it before it happens. However, with Simon I don’t always make him walk right beside me. Of course, when we cross a street, or walk by a person, or if we go in a store or something similar I make him stay next to me. Otherwise, I don’t. I give him the full length of his leash. I do this with him because his issue is impulse control. I’ve found that the shorter I keep his leash and the closer I keep him to me when we begin our walks then the more agitated he becomes, and therefore, the more likely he is to pull. This doesn’t mean that he can’t and hasn’t learned to walk beside me because he definitely has, but it has caused me to take a different training approach with him as well as a lot of patience. My point here is that every dog is different and sometimes it takes the use of a different technique to teach your dog what you want them to do.

Once again I give you my disclaimer: The tips I will present, explain, and discuss throughout this series of posts are ones that I’ve gathered from training books I’ve read, training classes I’ve attended with Simon and Rosee, and from trainers I’ve talked to. I want to be clear that I am not a dog trainer in any way, shape or form, and my knowledge of dog training comes from the aforementioned sources while training my own dogs. I can assure you however, that all these tips have been tried and tested by everyone here at Play Hard, Bark Often.

Tip #3: Walk around a more neutral space. If your dog pulls a lot and you are a person that gets easily frustrated, it can be best to begin your walking journey by walking around a more neutral space. What I mean here by “neutral space” is a space that is comfortable for you and one where you are less likely to become frustrated while working with your dog. Personally, when I started out teaching Simon and Rosee how to walk loosely on a leash my neutral space was my immediate neighborhood, and a nearby park where we could walk the perimeter over and over. My immediate neighborhood was neutral because I was still close to home and didn’t have to walk Simon or Rosee very far while they were still learning not to pull, and for some reason it gave me peace of mind to know that if I wanted the training session to end we were only minutes away from home. A park was also neutral for me because it was repetitive, not too far away from home, and giving Simon and Rosee something to sniff helped to slow them down some. I always felt overwhelmed when I tried taking either Simon or Rosee out on a longer walking route when I was first trying to train them to walk beside me and not pull. Just the idea that I had several blocks until we finally got home or had twenty minutes left of a forty-five minute walk was excruciating to me when they were still working on not pulling. Frankly, my patience levels were not that high, and so I decided that to avoid becoming frustrated (because that didn’t help anyone) I needed to change my approach. Walking your dog should be an enjoyable experience. In my opinion, it’s a good way for both humans and animals to receive their daily exercise. However, in order to achieve a good walking partner some training must be done. So, if you’re trying to teach your dog how to walk loosely on a leash and beside you it helps to think of it as a training exercise in the beginning. Start out with small, but concentrated efforts and work your way up from there. Remember it’s a (learning) process, not a race.

Tips #4: Whenever your dog pulls turn around and walk the other way. The “turnaround method” is one of my favorite methods to employ when dealing with leash pullers, and it’s actually one of the most recent ones I’ve learned as well. I learned this method about a year ago when Monica and me took Rosee to a refresher training class. It’s pretty simple, and I like it because it makes me feel like I’m able to address the problem of leash pulling right when it occurs. The “turnaround method” goes as follows: as you’re walking and your dog starts to pull, stop, say “No, your dog’s name,” and walk a few steps backward while your dog turns around and follows you, then start to walk forward again and give your dog a treat/praise when they walk next to you. Some dogs might not need a treat when you begin to walk forward again, and instead be like Simon in which his treat is walking forward again. Now, if your dog pulls a lot it’s probably going to take quite a few turnarounds before they start to walk next to you for a more extended period of time. But don’t give up because this method can work if you’re consistent in using it. I found that this method has really helped Simon learn not to pull on the leash and walk beside me, and he is a dog that I thought nothing would ever help him learn to do that. Using this method with him also helps me not get so frustrated with him too since, like I said, I feel that I can correct his behavior right when it happens.

Tip #5: Take a break. Sometimes there are times when your dog decides to pull non-stop or they might see another dog, garbage truck, or whatever excites them and pull. It’s during these moments that having them focus on you is difficult and it can feel that no matter what you do they just won’t listen. At times like this the best thing I’ve found to do is to stop and take a break. I stop and make my dog sit next to me and simply wait for them to calm down. This can take some time, especially if whatever your dog saw really excites them. For instance, if I’m walking Simon and we pass by a park where a dog is off leash (even though all our parks have signs that say dogs must be on a leash, but I digress) and running around, Simon can, at times, become extremely excited, and pull on the leash. In instances like this it can be hard to get him to pay attention to me, which is necessary if I want him to walk next to me without pulling. Instead of fighting with him, it’s much easier to stop make him sit down and wait for him to relax. I also have treats so that when he makes eye contact with me I give him one, which helps encourage him to learn to pay attention to me more so than anything else. It’s not that I don’t want him to look at anything else going on, but I want to be the main source of his attention. Mostly I like this method as it allows me to remain calm and not become frustrated, while it teaches Simon that he should remain calm in times when he would normally become excited. Think of it as a way to desensitize your dog to exciting or agitating situations. Now, I have to admit that I actually picked this tip up from Leslie McDevitt’s book Control Unleashed in her chapter on how to deal with reactive dogs. This was a method I first began using with Rosee to help her get used to seeing other dogs while we were at parks and such, and not become so anxious. Honestly, I have to say this is one of the best methods I learned and has worked wonderfully for Rosee. As I came to work with Simon though, I found it to be very helpful in those few moments he became overly excited and wouldn’t pay attention to me whatsoever. Not only does he pay attention to me more, he also doesn’t become as excited anymore.

then the next minute she turns…(Fast and Furious, of course) 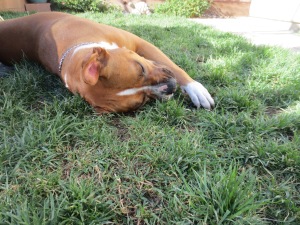 It’s amazing what dogs learn to do for themselves, or rather for each other. 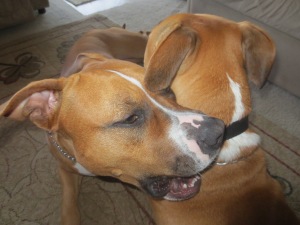 And sometimes they’re just too darn smart for their own good.

It seems Simon has found a better use for my ipad.

There is a vast expanse between accepting who your dog is and tolerating the ways in which he/she behaves.