Remember that second birthday I mentioned earlier this week?

Well, the second birthday of the month of October that also happens to coincide with Halloween is Rosee’s 5th birthday!

I know for dogs (and other animals too, probably) birthdays don’t mean as much to them as they do for us humans. Yet, I can’t help but feel that Rosee’s 5th birthday is really a big milestone. I mean, she’s finally a whole handful! More importantly, by turning five Rosee is officially an adult dog. By age five dogs should be out of their growing phases, meaning they’re not teenagers anymore. Thank goodness!

Still, I can’t quite believe that Rosee is five years old. It’s almost unbelievable that she’s been a part of our lives for so long, and yet it seems that the time has flown by so quickly at the same time. She’s grown so much over this past year especially, and while I still like to think of her as my puppy (mainly because she’s the youngest), she is most definitely an adult dog.

Rosee listens better, is more focused on her humans rather than getting distracted by outside influences, she’s learning not to be afraid of other dogs and can walk past them (as long as she has some space) without issue, and she doesn’t try to test her boundaries as much as she once did (meaning she doesn’t steal the TV remote anymore). Don’t get me wrong she is still full of spunk and spice, but she channels it into more appropriate behaviors. For instance, when anyone arrives home she grabs her bone to bring to them as they enter the door rather than jump on them in her excitement. Win!

Life really is never dull with Rosee in our lives and I know we wouldn’t have things any other way. 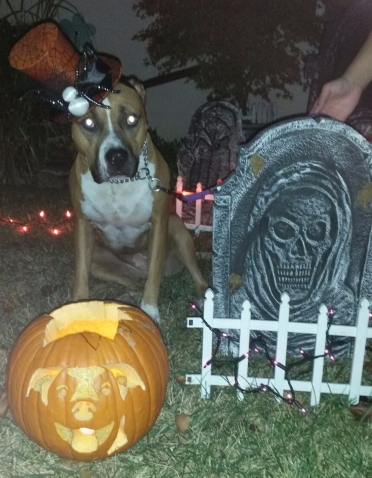