I recently came upon an article entitled Dog Given Up For Being “Too Big” Gets New Life, New Job. It was a story about Lupine, a dog from Arizona, who was given over shelter for being too big, and she subsequently has become an ambassador for large dogs. When I first saw this article I have to admit I wasn’t surprised. It’s really a sad day when I find that I’m not surprised over another inane reason someone uses to justify giving up their dog. Yet, when I read this article it really struck a chord with me because I could relate. Of course, I’m not saying that I could relate to deciding to give up my dog because she or he got too big, but I can definitely understand having a dog that grows much bigger than was initially anticipated.

You see, as a newly rescued puppy my mom and stepdad took Simon to his very first veterinarian’s appointment and was told that he would probably be about 40 to 50 pounds fully grown. Now, I know this was an educated guess since he was part of a litter of stray puppies that was abandoned at one of our local firehouses. No one knew what kind of breed or rather breeds he was, and any guess we made never seemed to fit him quite right. However, whenever we took him anywhere anybody that saw him swore up, down and sideways that he was a pit bull, and for a long time we too simply thought he was a pit bull as well.

Weeelllll….as you can tell from pictures of a more adult Simon he pretty much turned into a mystery of a dog. Don’t get me wrong, he does seem to have some pit bull in him, but personality/behavior-wise we also think he might have some labrador or boxer mixed in (or maybe even dalmatian, especially given all the spots he has on his stomach and legs). Particularly, given his coloring most people these days ask us if he’s a boxer-mix. Still, he ended up turning out a lot bigger than we originally thought he would be. Instead of only being about 40 to 50 pounds, he ended up weighing in at about 75 pounds fully grown. iUnexpected Twist!

Seriously, talk about having a dog that ended up being “too big.” Plus, along with weighing 25 pounds more than we thought, he also grew about six inches taller and a bunch more inches longer than we thought he would get as well. Yet, I can’t imagine Simon being any other way. His big and tall appearance is an essential part of him (no kidding, I know). While there are some instances I don’t like his size—like when he can reach some food left out on the counter because of his long legs and tall stature. However, his size can also make it easier for him to reach my cheek to give me a kiss.

Size Simon turned out to be.

Now, here’s what I’ve discovered from being owned by “too big” of a dog: a dog is a dog whether big or small. All dogs need exercise, both mental and physical. All dogs deserve to be walked, and have play time, and most importantly they deserve to have people that love them. Most importantly, a dog is only as well-behaved as its owner encourages. Sure, perhaps a smaller dog can’t do as much damage at one time, but they can still cause damage, be unruly and poorly behaved, and even aggressive. For instance, I have these neighbors that many years ago had two bigger dogs (about 60 pounds each) and due to lack of training, socialization, and just plain interest from their owners they just weren’t nice dogs. They were scared of people, didn’t react well to anyone, and were basically almost always left out in the backyard. Fast forward to present day and these same neighbors now have two small dogs that are exactly the same as those previous bigger dogs behavior-wise. So, what’s the common factor here you might ask? The owners. It’s the owners. Bad owners=poorly behaved dogs, no matter what size they turn out to be. Of course, a bigger dog does take up more space (or maybe they’re just a bigger lap dog), and consume more food (or perhaps they’re great French fries sharers, if that makes sense), but I can’t say there’s much of a difference between having a 50 pound dog versus a 75 pound one. Big or small a dog has so much love and companionship to give. All they need is someone to give it to and it seems that Lupine ended up with exactly the right people for her.

So here’re two paws (one from Simon, and one from Rosee) up to all you “too big” dogs out there. 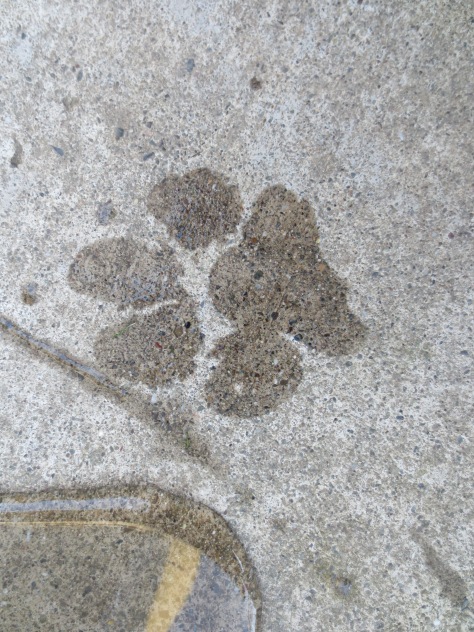 Let’s just say your size means you have even more love to go around.