Now, I know that this day is meant to celebrate the American Labor Movement and typically my family gets together to have a barbecue, but today we decided to do something a little different. Being that the temperature has been somewhat cooler this past week, my mom thought it would be nice to take a day trip with the dogs. We don’t always get the chance to take Rosee and Simon to new and exciting places.  We go to the beach at least once every couple months, various parks nearby, we’ve taken them to the Sacramento River because Simon likes to swim, and ot too long ago we also used to take the pups to a nearby nature preserve. However, after the last time when we came home to find a handful of ticks on Simon we made the decision not to go back, just in case. So, we do take them places, but it always seem to be one of the same places few places we usually go. Today though, we all decided to load up the pups and go somewhere somewhat new: Folsom Lake in Folsom, CA.

I say that it is somewhat new because earlier last year we did visit the unearthed city down in the Folsom Marina. Due to the current drought in California, the water levels of the lake are so low that an old mining town was uncovered.

Not much of the town is left, except for a few rusted tools and boundary lines, but it’s still pretty neat to see. According to the park rangers, the ruins can be found by going to Brown’s Ravine (I can never remember the name myself), although after googling it I think it’s also called Mormon Island. Frankly, I get really confused and can never find a straight answer off of the state park website. Still, it was an interesting trip and the pups enjoyed sniffing around everything. We all had a good time. This year we thought we’d go back Folsom Lake, which wasn’t necessarily new, but our adventure ended up taking us some place a little different.

Folsom Lake, or Folsom Lake State Recreation Area as it is officially named, is a pretty big state park. It has numerous entrances, campgrounds, and trails among other amenities available to visitors. As I said, our original idea was to go to the Marina to see the ruins. Unfortunately, we didn’t quite remember how to get there, and wound up ending up at a different entrance to the park called Beals Point.  While going to Beals Point wasn’t planned, upon entering we decided to get out and explore because it turned out to be such a nice place. There was a big grass area, a bunch of picnic tables, and a giant lake bed to walk down. (I feel the need to mention that there were also numerous bathrooms, which were pretty nice as well.) 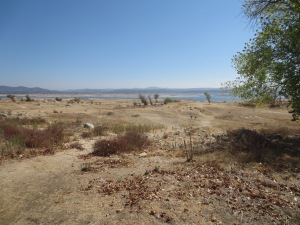 We started our trek by walking down towards what little lake there was. The existing lake bed may not have much of a lake, but it provides a nice place to walk through and explore. The scenery was beautiful and if you walk down far enough you will eventually encounter the lake. The walk was kind of long and all in the sun, though since the weather wasn’t too hot no one minded. Plus, after walking down all that way the pay off was worth it.

The first thing Simon did once we got to the actual water was down.He took a momentary breather before diving in fully, and it wasn’t long  before Rosee decided to join him.

The only problem was that I was not prepared. Not prepared at all actually and before I knew what was happening Rosee dragged me right into the water. My shoes mostly got ruined in the process, but seeing the grins on both pups’ faces was worth it.

Simon, of course, spent most of his time swimming around. Much to our surprise Rosee also swam around for a while, which was only surprising because she usually avoids going in so far so that her feet can’t touch the ground. Yet, today she was swimming like a champ.

Rosee and Simon had way too much fun, and got way too wet. Luckily, the walk back up to the top where the (empty) lake bed meets the grass area was long enough to dry them off.

We walked around a bit more, though after so much swimming both pups were pretty tired. Overall, we all had a fun day where adventures where aplenty and exploration of absolutely everything was required. It seems our wrong turn actually turned out pretty exciting, or should I say rightly awesome!

Finally, we had to call it a day (before it got too hot) and returned home with two very tired pups.

I can’t complain though, because, sometimes, tired pups are the sweetest kind of pups. 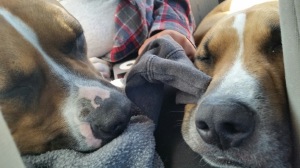 I hope everyone else had a wonderful and relaxing extended weekend!