I knew summer was on its way, I guess I just didn’t quite realize that it was already here! Recently, the temperature has spiked into the 100s. For days. Of course, we make sure to turn the air conditioning on before it gets too warm and to keep the house cool, but in my house the air conditioning is not something we like to leave on for a long time. Generally, it’s used to cool the house down and then it’s turned off at night before we all go to bed. Unfortunately, despite the blazing heat, both Rosee and Simon expect their daily walk in the morning, and Simon still requires his afternoon play session. The problem still remains that it is too hot. Now, I don’t mind playing with Simon, but when it’s so warm outside it is not great to play for an hour. The cement is hot which can be dangerous for the dogs’ paws, Simon gets winded easily, and too much time in the sun can mean a longer time to cool down. Therefore, I am going to share a few tricks on how you and your dog can beat the heat this summer.

Much like humans, dogs need to stay well hydrated, especially over the summer. Most dogs don’t have any problem drinking water. If they’re thirsty, they’ll drink water. Just like if they’re hungry, they’ll eat. However, during the summer there are a few important things to keep in mind when it comes to ensuring your dog is well-hydrated. Drinking water, while significant, can be harmful if too much is ingested, particularly at one time. So, in order to avoid this, the best thing to do is to give your dog water breaks over a period of time. For instance, if we take Rosee and Simon on a long hike or something of a similar nature we make sure to bring water for them and every so often we all take a short water break. This way the dogs stay hydrated throughout the whole walk. Also, while I know it can be tempting for your dog if they see a water puddle from a sprinkler or run-off, I don’t recommend letting them drink from these puddles. Rosee always likes to look for a puddle while we’re out on walks, but I can never be sure what’s actually in the water. Maybe there’s soap (if someone was washing their car) or run-off from lawns which could d have things in it such as fertilizer. So, just to be on the safe side, if you don’t know where the water came from and if there’s a chance that there could be something foreign in it, don’t let your dog drink it. 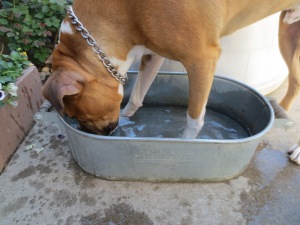 Trick #2: Exercise early in the morning or later in the evening.

Even when the weather turns warmer, exercise is still a must for most dogs, especially dogs like Simon. Normally, I like to take Rosee and Simon for walks in the morning anyways, but during the summer we sometimes have to go even earlier than usual. Where we live it can get pretty hot (we’re talking in the 100s for multiple weeks). As a result, it gets too hot to go in the afternoon, and by the time it’s cooled down enough in the evening it’s too late (I don’t like walking when it’s dark out). Plus, I enjoy going in the mornings because for me it’s a natural energy boost. Either way, whether you go for a walk or play with your dog it’s important to avoid peak sun hours (I think it’s about 10:30am to 4pm). Along with avoiding the hottest part of the day, because it’s just not good for anyone to be outside when it gets that warm, it’s also important to watch out for your dog’s feet. While the pads of their paws are usually pretty sturdy, they can still be vulnerable to extreme weather conditions. The general rule (as far as I know) is that if the ground is too hot for you to walk on it barefoot, then your dog shouldn’t be walking on it for prolonged periods either. That’s why it’s best to exercise in the mornings before it gets too warm, or later in the evening after the sun has gone down. 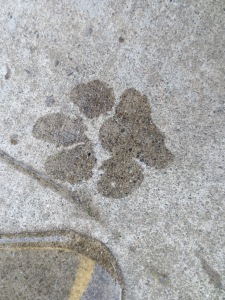 Trick#3: Find ways to engage your dog inside.

While daily walks can be rescheduled to more accommodating parts of the day, the same can’t be said for Simon and Rosee’s playtime. Every day around 5pm Rosee and Simon awake from their afternoon naps and decide that it’s time to play. The problem still remains that the sun hasn’t quite set and it’s still pretty warm outside. Yet, both dogs still expect to play.  Consequently, I’ve had to come up with ways to entertain them inside. Unfortunately, playing fetch inside the house is out because there’s not really enough room and Simon’s not great at paying attention to what he might run into. Although, if Simon and Rosee don’t get any playtime, they start to wrestle, and being part Boxers that can involve a lot of jumping up, which again, there’s really not enough room for. Ultimately, I’ve found the best ways to entertain the dogs while inside include giving them bones they can chew on, rope toys because they can both pull on an end (and they tend to tire out quickly) and it doesn’t take up a lot of space, and training practice. Besides the bones and rope toys, training practice is helpful in keeping Rosee and Simon entertained as it’s mentally stimulating and helps build good habits (since, you know, training your dog is really never ending). 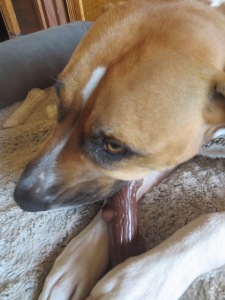 Most dogs love treats, mainly the edible kind. Simon will eat just about anything he’s given or stolen. He especially prefers tortillas, particularly the homemade kind (he’s weird like that), and while Rosee loves special treats as well she can be somewhat pickier about what she puts in her mouth. Nevertheless, treats during the summertime can take on a whole new meaning.  Ice is always a good treat during the summer, especially if you’re trying to keep your dog hydrated. Sometimes after their morning walks I’ll set out a bowl of ice for them to help them cool down more easily. Other times I just put ice in their water trough, although it’s mostly for my own amusement as Simon likes to bob for each piece of ice.  Also, during this time of year seasonal produce can make excellent treats. For instance, try a nice dog-friendly fruit salad. Rosee and Simon particularly love strawberries and bananas, and recently tried blueberries for the first time. Simon wasn’t too sure about the blueberry and actually spit it out a couple of times before deciding to eat it. You could even freeze bananas and strawberries to serve as a cold treat. Point is: get creative. Dog treats can be more than milkbones.

Besides water, another summertime essential for a dog is some type of shelter. Particularly, if your dog is left outside when you’re not home it’s important to provide them with some type of shade or dog house. Personally, I prefer the igloo-type dog houses because they stay cool in the summer and warm in the winter. In addition, we have a covered patio so there is ample shade in our backyard. Still, when it gets to the days where the temperature reaches the 100s it’s best to stay inside. Originally, Rosee and Simon were outside dogs, meaning that when we weren’t home we left them outside in the backyard. However, due to circumstances (i.e. neighbors, and weather) we now leave the dogs inside when we aren’t home. Frankly, over the summer it’s just too hot outside to leave them there during the afternoons. I know leaving your dog inside isn’t for everyone. Some dogs aren’t used to holding “it” for long periods of time or maybe you’re afraid they’ll get into too much mischief. I would probably recommend then kenneling your dog while you’re gone. Otherwise, make sure that if your dog is left outside when it’s hot they have shade, shelter, and plenty of water. 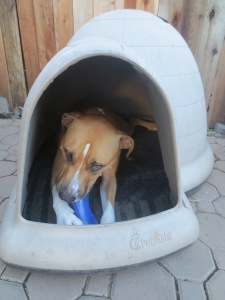 Of course, when it gets too hot outside and the air conditioning just isn’t doing enough the best thing to do is have a pool party of course. Whether it’s a kiddie pool or an actual full-sized pool, taking your dog swimming or splashing through it can be fun, and a good form of exercise. Rosee and Simon absolutely love water, just not when they’re getting bathed. They love splashing around in the waves when we go to the beach, swimming in the river when we visit the local park next to the Sacramento River, and will not stay out of the pools at the local dog park we sometimes visit. Simon is a natural born swimmer. The first time we took him to the Sacramento River he went right into the water and took off. He couldn’t get very far since he was on a (very long) leash, but he swam around for about an hour before coming back in to the shore. Rosee, on the other hand, is a splasher. She’ll only go as far as she can touch the bottom, and loves chasing the waves at the beach. Overall, it’s just another way to have fun with your dogs, and it’s most fun when it’s warmer outside. 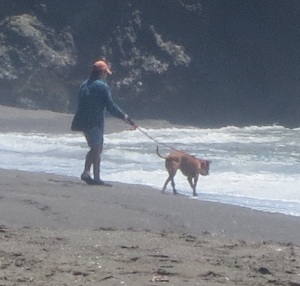 I know this may sound strange (or maybe not), but stick with me on this one. Due to the fact that dogs do not sweat they have to cool down in a different way, hence why they pant. Another way to cool them down though, is to get their paws and bellies wet. Now, I know what you’re thinking, and yes, dogs are similar to pigs in this way. However, instead of rolling around in mud (even though Simon would probably do this if he could), dogs typically will roll around on grass (since it’s usually cooler) or step through puddles of water. Or some dogs may be like Simon who just puts his front paws in his water trough, and if he’s really warm he will paw at the water in order to splash it on his stomach. Basically, getting your dog’s stomach and paws wet can help them cool down or at least keep them cool for a little while. 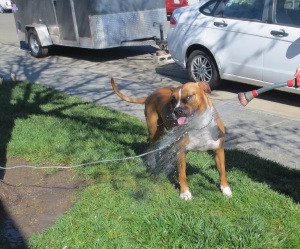 So there are my tips for beating the heat this summer.

It may be hot outside, but there are still ways to have fun with your dog(s).