Workin’ in the garden, yeah

Come on and sing it with me

Because gardening is only fun as long as Rose Royce and other Motown hits play in the background.

Even he knows he’s destined for greatness.

Leads to a good and sleepy pup. 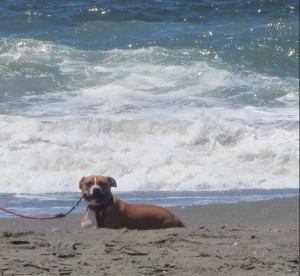 I thought I would be a generous companion this week and dictate a blog post in lieu of my human. She offered to do it for me, but really what does a human know of the sport of fly chasing? I’ve only been perfecting my methods for the last three summers. (Your sarcasm is noted Simon—Theresa) Though, I did require some help from my aforementioned human to actually type this post because, alas, my paws are not dexterous enough for the laptop’s keyboard. Nevertheless, my human graciously agreed to type my story out for all of you to see. She also tried valiantly to capture my demonstrations of each step, but I fear my movements occurred somewhat too quickly for her camera to capture easily. She did do her best however. Not everyone can be as multi-talented as me.

Now on to the main event…

In order to properly fly chase the first thing that must be done is to spot a suitable fly. It’s preferable to choose a fly that is not moving around too much. If a fly is moving around a lot, then it can be more difficult to catch. You will need the right mix of focus and control to find just the right fly to attempt to catch. But do not fret, for it can take a while to spot an appropriate target.

Once you’ve got a target in your sights you then come upon a most sensitive step: getting close enough to pounce. It can be difficult to approach, especially if the target is shifty. Yet, if you’re not close enough to the fly, then it can be difficult to ultimately catch it. That’s why a careful and patient approach is required. My owners may not think I’m very patient, and while most of the time I’d have to agree with them, I make an exception for fly chasing. Luckily flies aren’t the most intelligent creatures around (and surely everyone knows dogs are the smartest), which makes them an easy target. Still, it’s best to approach with some finesse to ensure that your target remains cooperative or at the very least unaware.

Then stay perfectly still until just the right moment

It is of the utmost importance to wait for just the right moment to pounce on your unsuspecting target. After you’ve gotten close enough it’s imperative to wait for the right time to make your move. Patience is key here! My people may not think that I’m capable of patience, but given the right motivation I can be quite good at waiting for the exact instant to act. The truth is I just happen to be cleverer than my people and have them trained well to suit my needs. (I, meaning Theresa, would 1) like to object to this statement, and 2) state that “I knew it!”) It is quite important that your target not know what you are planning to do. Instead the fly should remain in blissful ignorance until you make your move. Otherwise, you chance them fleeing before you’re ready. The phrase “still as a statue” comes to mind at a time like this, and also “keep your eye on the ball” (or fly in this case).

Last pounce on the unsuspecting prey

Last, but certainly not least, pounce on the fly! Hopefully, if you have been able to get close enough, your pounce will result in immediate capture. However, if you’re still working on your technique it can take a few tries in order to be successful. Flies are tricky targets and due to their size and ability to move quickly it can be difficult to capture them. Ultimately, their evasive maneuvers only make their eventual capture by me that much sweeter.

Now go forth on your on fly chasing journey. It may take some time and practice to master my steps, but actually capturing the fly is only part of the fun anyway.

Simon is clearly born of the “me” generation. 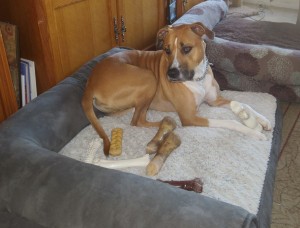 Another day, another pile to deal with, and unfortunately it is not one that Simon left for me.

Out on a walk (déjà vu hitting you yet?), the sun was shining up in the blue sky with a nice little breeze keeping it from being overbearingly hot. Simon decided to be a stubborn little something and did not feel like relieving himself during the ten minutes we had already spent at the nearby park. So, we were forced to continue on our walk and hope he didn’t decide to just stall in the middle of somewhere more regrettable. Fate, meaning Simon, is not so amenable.

Halfway through our walk Simon just couldn’t take it anymore and squatted . . . in the middle of the sidewalk. Now, in the town that we call home there is a street that has one of those roundabouts, with a large patch of grass in the middle and four houses surrounding it. Simon decided to relieve himself as we walked on the side of this roundabout, right on the sidewalk next to one of these houses. We were literally one block from the park.

The four of us (me, Theresa, Simon, and Rosee) have walked this roundabout for the past two years (three years if you count the time before Rosee) since it leads the way to and from one of our favorite local parks. We’ve passed by all the same houses and people for that long too. And for the past few years we have been model walkers. Every single time Simon or Rosee poops it gets picked up, we even go buy the more expensive and thicker lavender –scented bags in order to do a better job of picking it up. Theresa and I always do our best to also keep Simon and Rosee’s marking instincts away from the nice and well-kept lawns we walk by. However, sometimes Simon (because it’s usually Simon) just can’t help himself and the instinct to go takes over.

So, Simon pooped on the sidewalk and before he could even finish with his private affair this, this lady. . . .wait, no, that would assume that she had more class. . .

This woman. . . nope, that’s just insulting to me and everyone else that identifies as such. . .

This coward shouted out of her open window to “Pick up that dog shit.”

REALLY?!?
And then she slunk back into her shadowed home to hide like the rude weakling that she apparently is. Because let’s be fair, no one just shouts and curses at two girls quietly walking their dogs without being just that. I mean the dog hadn’t even finished going, Theresa was just about to pull out the poop bag from the handy-dandy carrier we always keep attached to the leash, and it wasn’t even in front of her house! He had gone off to the side on the sidewalk, i.e. public property. Quite frankly we didn’t have to do anything, but we’re good people and like to actually pick up after our dogs, so we do and we did. Theresa picked up Simon’s mess and I just stood in front of the offending coward’s house and stared. I could not believe what just happened.

What happened to being a decent human being? To being considerate of others? To giving someone a chance?

Because, you know, I get it. I hate it when other neighborhood dogs poop on my front lawn, and they do it at least once a week. I hate that I go to take the trash out in the mornings and see little logs mucking up my grass. But I deal with it. I pick it up and throw it away. I get mad for ten seconds and then I let it go because it’s over, it’s done with. It’s just poop. Sure there are some people in this world that can’t stand it, that puke at the mere mention of it. Believe me, I have one of those in my own family. However, seeing this poop on my lawn, even seeing the offender caught in action has never made me curse and shout at anyone to go pick that shit up. Maybe this makes me a pushover or complacent, but I believe in just being a nice person. I believe in being decent and considerate. But I guess that’s just me (and the rest of you reading this blog).

Why can’t we all just get along?

Oh right, because this person didn’t have the decency to at least come and say what she had to say to our faces. If she did we could have assured her we were always going to pick up Simon’s waste, and that perhaps she should be a nicer person. (It would help with her blood pressure I’m sure.) And then maybe we could’ve at least saved her next unsuspecting victim from such harassment.

It’s such a shame.

Some people are the worst.

I label myself as a dog owner, but the reality is I am owned by dogs. 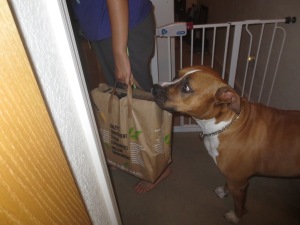 It’s amazing how therapeutic a game of fetch can be.

“The greatest thing you’ll ever learn is just to love and be loved in return.”–Moulin Rouge