Toys. What can I say about toys? Other than the fact that one of the hardest things to talk myself into buying for Simon and Rosee is toys. Not because I don’t want them to have toys, but more so because they go through toys so fast and toys aren’t exactly cheap. (I guess that’s three things, huh?) Combine all that with the fact that both dogs love to chew and what you get left with is a garbage can full of broken, ripped and shredded toys. Even when we specifically buy toys that are labeled “for powerful chewers” they never seem to last long. Otherwise they get bones, which are good options, but they don’t quite hold the same appeal as toys when Simon and Rosee want to play.

On the lookout for a good (because perfect is impossible right?) toy Simon and Rosee have developed quite a cache of them. You see, it was fun at first when Simon was a puppy to go to a pet store and buy him various types of toys. Especially with his energy levels I would always look for toys that challenged him and could keep him interested for an extended period of time. As he got older though, the toys needed to be more indestructible. Then Rosee came along, and when it comes to play these days a good toy needs to be difficult to tear apart (Rosee’s favorite pastime) and big enough for tug-of-war.  Am I expecting the impossible? Yes, because most toys are not completely indestructible, but I at least wanted some dog toys that would take longer for Simon to tear apart than a few minutes. Now, what I mean when I say “toy” here is something that Simon and Rosee could play with. Something either of them could play fetch or catch with (although not so much Rosee who prefers being chased), chew on safely for a little while (but not too long since the function would be for play), and something that wouldn’t break it they both tugged on it together.
Recently, I came across these Kong Squeezz toys. To be honest, I mostly noticed these toys because they were on sale (can we say 2 for 1!). I thought, since these toys were rather inexpensive, it wouldn’t matter much if Simon and Rosee destroyed them quickly. 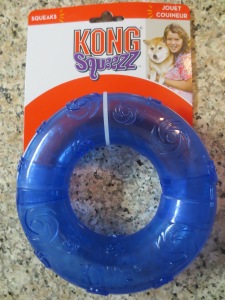 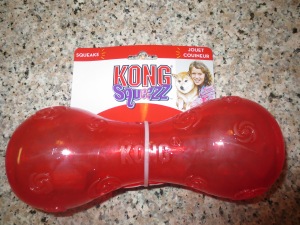 At first, I wasn’t sure which type of toy to get as there are several different shapes including a regular stick shape, a dumbbell, a bone, a ball, and a ring. I stuck with shapes that would be big enough for both dogs to grab a hold of at the same time, and that I could easily get out of their mouths (this was before they really learned “drop it”). 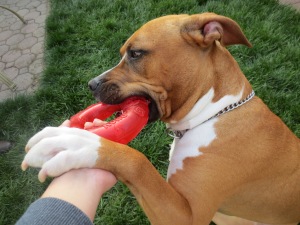 Right from the beginning Simon was in love with his Kong Squeezz toy, and wouldn’t really play with anything else. Every morning he would sit at the laundry room door, since that’s where I keep their toys, and wait for someone, anyone to give him his toy. Once he got his toy, it was like nothing else existed. The rings are his favorite because he can put his mouth through it, and maintain a strong grip. However, the dumbbells tend to have better squeakers, which he loves to squeak endlessly. Rosee, on the other hand, enjoys her Kong Squeezz, but mostly likes to try and take Simon’s toy. 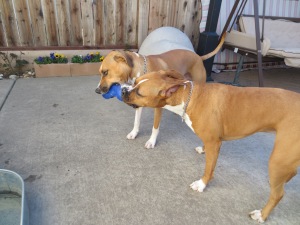 Now, there is one important thing I learned about these toys that I should probably share (even though it’s kind of gross). While I don’t recommend letting your dog ingest anything that isn’t edible, I would like to say that (based on my own experience with Simon and Rosee) Kong Squeezz toys can be passed (I assume you understand what I’m trying to say here). One of the reasons Rosee and Simon like these toys so much was because they could pull on them. You know, hold it down with their paws while they pull at a spot with their teeth. If they’re left alone a little too long with one of these toys (which we don’t do anymore) it pretty much ends up in pieces. Unfortunately, Simon has developed a fondness for eating the soft rubber pieces he pulls off, hence how I know it can be passed. Rosee, thankfully, just spits the pieces out and continues to destroy. As of now, they only get to play with these toys if they’re supervised, but since we mostly use these toys for play and not to chew it’s okay. 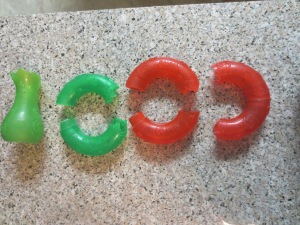 Generally, I like these Kong Squeezz toys because they come in a variety of shapes, are fairly indestructible (unless it’s used exclusively for chewing then it won’t last too long), are really great for playing fetch, and they almost always seem to be on sale (at least at the pet stores I shop at and I always stock up). Now, I have to admit that I don’t really like (read: absolutely loathe) squeaky toys, but Simon does and luckily the squeakers in these toys never last very long. This might be a downside to some, however I don’t mind the squeaker only lasting a week or so (that’s with regular, everyday use). Also, I probably wouldn’t recommend leaving your dog unsupervised with a Kong Squeezz toy just because it’s not really a chew toy, and if your dog is anything like Simon and Rosee it will only end in a ruined toy. Still, I really like using this toy to play fetch with Simon, and Rosee and Simon enjoy using it to play tug-of-war. For these main reasons, I would definitely recommend the Kong Squeezz toys to any dog owner.

One thought on “The Squeak of Life”