One: Dastardly deeds and deviousness.
He develops a jerk attitude, like he’s deliberately snarky. He gives off little growls of indignation. When you don’t pay complete attention to him he comes over and starts to nibble on my toes. He sneaks through the cat door to the garage when he gets a little too excited and running around the house doesn’t do anything to quell the surge. He looks for anything butter-related left out on kitchen countertops. And when I go to him, tell him to get off counters, get out of the garage, and leave my toes alone, you know what he does? He smiles.

Two: Luring you into a false sense of security.
After respectfully listening to every command he has been given for a good long while, he starts to be a little more subversive in his “goodness.” We become trapped in a frustrating cycle of “He knows what I’m saying, he’s just deciding not to listen,” because dogs are totally capable of this. In fact Simon has subtly been trying to overthrow the current regime that exists in our house by initially only half-listening to commands. I tell him to sit, he squats as if to sit until I turn away assuming he is going to listen to the command he has followed through on over one hundred times already, except he doesn’t. Pretty soon he’s not even listening to the command, just running circles around me.

Three: Constantly coming up with ways to take over the world, the house, the couch, or at least your cereal bowl.
After displays of indignation and flexing his choosing power, he starts taking what’s mine. He barks at the front window, staking his claim to all who dare pass by. He leaves his mark on the nice, pristine front lawn to ensure the neighbor dogs that get lose don’t get any ideas about moving in on his territory. Even more boldly, he puts his head on my lap at night, staring me down until I have no choice but to move over so he can take my spot on the couch. The cherry on top, he’s learned how to distract me, jumping on the couch so that when I go to get him off he runs away to my unguarded cereal bowl, lapping up the leftover milk with wild abandon. He’s got no regrets.

Four: Finding a secret lair.
When he doesn’t want to be bothered, meaning he has had to listen and “leave” his ball one too many times and he’s ready to rise beyond covert subversion, he goes and hides in his dog house. His dog house being the one place no one can follow him into, basically because no one else fits, not even Rosee. He likes to sit in his house and bark at me. I take this as his way of manically cackling at the intelligence of his “evil” plan.

Five: You have already, thoughtfully, decided upon a villainous name for your canine companion.
Simon, as you may have heard, is The Dew Claw. Rosee is simply The Boss. Her powers are infinite. 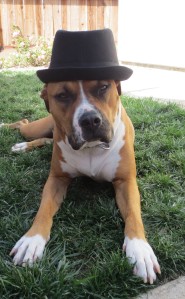 If you are experiencing any of these symptoms, I mean steps, please do not worry. In the end the Pawed Crusader always triumphs over The Dew Claw, no matter how determined the latter is because good always wins out over evil (uh, duh!). And if you don’t believe me The Boss may just have to come and convince you (she’s decidedly flexible in her nature when she wants to be), but she’ll be smiling while she does it.