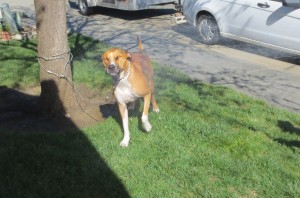 About two summers ago when Rosee became a new and permanent fixture in my family’s life one thing became painstakingly clear. Two medium silver bowls (otherwise made for feeding) filled with water and left in the backyard for Simon and Rosee were not going to cut it. Even before the family adopted Rosee, Simon had started to make a habit of knocking over his water bowls because he much rather liked to play with his water than drink it. At the time we would often leave Simon safely secured in our backyard if we were only going to be gone for an hour or so, and every single time we returned we found him dripping wet and his two water bowls clear across the yard. The silly boy was always super thirsty and would lap up a bowl of water once we refilled them, but every time we left him alone he would dump them nonetheless. Clearly, a solution was needed. It was summer and he couldn’t be without access to water, not to mention the amount of water we were wasting because of his escapades. A solution became even more paramount once we got Rosee and realized that the water bowls tipped over even faster than before. While Simon liked to play with the water, Rosee was more enamored with the bowls themselves (see Pawndered Thought March 9, 2015). So, off to the pet store we went. 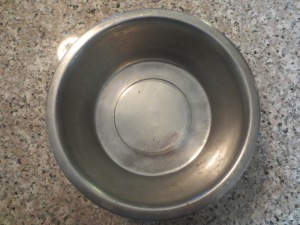 Unfortunately, the local pet stores offered few options besides slightly bigger water bowls. At one point my mother bought the dogs a stand (similar to this one), thinking that Simon and Rosee would leave the bowls be if they couldn’t get to them. Yeah. . . . it worked for about a day until the two decided ripping apart the plastic stand was more fun than running around after their water bowls. Water ended up all over them and the bowls were still used as playthings, along with that poor, poor stand. On with the search.

It wasn’t until my mother had dragged my sister Theresa and me to our local hardware and gardening store that I discovered gold, or at least the canine-water-bowl version of it. While perusing the planter aisle I came upon a simple oval grey planter that was about two feet long, one foot wide, and one foot deep. 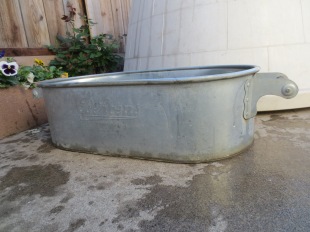 Now, I know what you all are thinking: It’s a planter! But it was also the perfect size for a dog’s water trough. More specifically, this particular planter was the perfect size for two headstrong mutts to fit their heads in at the same time, and heavy enough when filled so that those same headstrong mutts could not flip it over or drag it around the backyard as a toy. The instant I discovered the trough I had a Goldilocks moment, ready to shout to the world “This one’s just right!” The trough was perfect, especially with its reasonable price of about $25, and has continued to be a great buy for Simon and Rosee and their rambunctious ways. 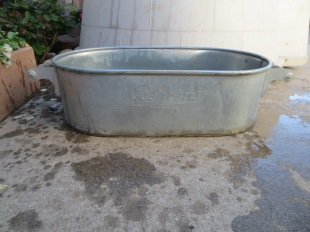 Anytime Simon decides to make a mad dash for the trough, with or without his toy, he always manages to make it with his two front feet in the water and yet the thing never moves. Both square heads fit in the trough at the same time, making drinking water easy and comfortable. The trough also holds a large amount of water, important when you have dogs that like to drink their weight in water (seriously, Simon has to be told to stop sometimes). Though it gets heavy when full, the trough is still movable (by a human), easily contending with the roving sun throughout the day. All in all, the trough was an awesome buy that certainly gets a lot of use, making its introductory price totally worth it. 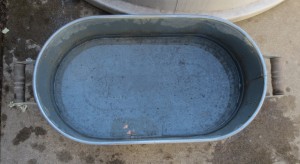 The only problem (if you could even call if that) with the trough is that it has to be washed about once a month. Because the trough does holding standing water it occasionally gets little green spots along the bottom, but these spots are easily taken care of with a little dish soap and a paper towel. About once a month, otherwise as necessary, I’ll empty out the trough, give it a good scrub with aforementioned soap and towel, and rinse it out leaving it good as new. Simon and Rosee particularly enjoy the filling it up part, loving to drink straight from the nozzle. 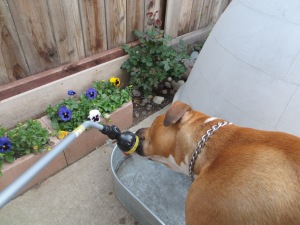 I guess they like their water best when aerated, such posh dogs! 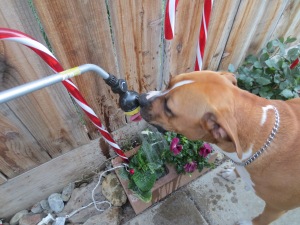 Point: get creative when it comes to finding necessities for your dog. Don’t just go to pet stores, but look around you at hardware stores, gardening stores, and anything else there is in order to find whatever it is that you need for your dog. If my mother hadn’t of dragged me with her to buy even more replacement flowers (because Rosee had already pulled up the ones originally planted with Simon as her willing accomplice) I never would have wandered down the planter aisle and found the trough that has faithfully served the dogs for the past two years. I would have had to continue dealing with wet dogs and scattered bowls, instead of knowing the peace I now have. Simon and Rosee would not have the comfort of always available water, even though they are no longer left outside alone (entirely different reasons apply). And above all, Simon would not have his own little pool in which to cool his feet and toy.

One thought on “Watering the Dogs: A Water Trough Review”