It was a beautiful California morning. The sun was shining, bees buzzing, birds singing in the trees. A perfect morning for a walk. Rosee’s leg was acting up so, unfortunately, she was forced to stay inside, but Simon was all smiles, ready to take on the world.

Theresa and I cut up some Pup-Peroni, grabbed the house key, tethered Rosee, strapped Simon into his Illusion Collar, and went out the door (quite a to do list). We started walking towards the end of our street, Simon deciding to be good from the outset, and the three of us set a steady pace as we rounded the street corner. Upon arriving at the next street to walk down we were graciously greeted by two neighborhood dogs we hear all the time. Since these two dogs were particularly excited to see us today, and I could see Simon getting a little too excited by all the commotion, we quickly crossed the street to put some space between our groups and give Simon room to calm down. Apparently, this was the wrong decision.

Normally, such a mean dog would be no concern. Theresa and I would simply cross the street, put some space in between ourselves and such terror, especially if we had Rosee. Except, in this instance we had just crossed the street to this side, and we could not go back. Essentially, we were stuck between a rock and a hard place, between loud dogs and loud dogs. Unfortunately, all I could do was walk out into the street, stepping around that parked cars, and put some space between my dog and the two little terrors. I thought I had found the solution, that everything would be fine and we could all go on about our business. I was so very wrong.

Next thing I knew one of the little white dogs had climbed his way over his fence (which was no easy feat as it stood about five feet tall and the dog was probably ten pounds soaking wet), landed on the sidewalk and charged Simon. We were forced to walk into the middle of the street (luckily with no cars coming from either direction) and move quickly. This little dog must have thought he had completed his job though, because after running a few feet out into the street he then turned back around and continued to bark at us from the sidewalk in front of his fence. Needless to say, the three of us swiftly turned the corner and continued our way on our walk, never looking back.

Now, why did I tell you this story? Why share a seemingly insignificant two minutes of my life with you? Nothing happened. No one got hurt. The dog went back home and we continued on our walk. Simon forgot about everything the minute we turned the corner. Simon didn’t even see these dogs as a threat. This silly boy just started jumping like it was all just so much fun! But I was upset. All I could think about was what if that dog had gotten closer? What if there were cars coming and we couldn’t run into the street? What if the dog actually bit Simon? What if the dog bit me or my sister? What if?

Simon’s never been face to face with an aggressive dog before. He’s never had to deal with a situation where he was in danger and needed to protect himself. He’s never been bitten before. I worried about how he would react. Would he cry? Would he fall? Would he bite back? What would I do? Simon’s obviously the larger dog. Would an animal control officer even believe me if I called and reported that he had been the one attacked and was not the one doing the attacking? I’ve heard too many stories of people calling about other dogs, yet their dogs ending up in trouble simply because of what they look like (i.e. Pit Bull-ish). Would the other dog’s owner get mad at me? Would she call on my dog? Would she blame me and my dog for “starting something”?

Call it over-reacting, but all of these questions run through my mind every time another dog comes after my dogs. And unfortunately, this is not an isolated incident. In the three years that I have had dogs we have been run up on/charged/chased/whatever-you-want-to-call-it quite a few times. The dogs have ranged from large German Shepherds and black Labs to Chihuahuas (have I mentioned that there a lot of loose ones in my neighborhood?) to Basset Hounds. All of our would-be attackers have not been mean or aggressive, some just curious puppies that haven’t learned any better, but for whatever reason they have come up on us they all had one thing in common. In every situation the owners have been right there, watching the whole time and doing absolutely nothing. Whether they truly believed that their dogs would listen to them and come back, or they thought their dogs would cause no harm, in my opinion these owners were irresponsible. These owners were thoughtless. These owners were inconsiderate. These owners were reckless in trusting someone else’s dog to be just as nice as they thought theirs to be. While Simon has no problems with dogs, loving everybody and everything, Rosee does not. Rosee might look nice and sweet as she walks down the street, but she has her issues and unless I put a big noticeable sign on her back that says “Scared and nervous around other dogs. Keep away” these people don’t know that.

But why should I have to label my dog? I am the one being a responsible dog owner, keeping her controlled and comfortable on her walk. I bring treats so as to train her to ignore distractions and to calm her down if she experiences an uncomfortable situation. I give her space so that she is not a danger to anyone or thing, and nothing is a danger to her. I read her body language and respond accordingly. So, why should I have to shame her with a sign just because other people can’t control their animals? Why should I have to pull Simon into the middle of a street? Why should my dogs be put in danger so that someone else’s can exhibit bad behavior? Because ignoring one’s owner and rushing another dog is bad behavior.

Obviously, I haven’t figured out any answers (otherwise I would be sharing with you the secrets to the universe). I can only live in this world and deal with things as they happen. And like some people I tend to dwell a little more on negative experiences than positive ones. I remember bad times more clearly than good times. This walk with Simon had two bad minutes out of fifty good ones. We continued on our walk and Simon was a perfect angel. It was a good day. Except, in my mind I remember those two minutes. I remember how I felt and what I did. I remember the dog getting over the fence. What I need to remember is the way Simon walked right by my side during the entire walk. I need to remember how Simon didn’t pull on his leash and how enjoyable our walk was.

So, I suppose the moral of my story is this: Be it you have a small, medium, or large dog and you are a responsible owner it might be really annoying (and slightly dangerous) when you have to deal with other people’s dogs’ bad behaviors, but deal with it (because you’re being forced to) and move on. Focus on the positive. Be proud that you could control your dog. Be proud that you know your dog well enough to take care of a negative situation. Be proud even if your dog freaks out like Rosee does (though less than she used to, it’s all progress!) because you didn’t. You were a champ, a rock star, a constellation shining brightly in a dark sky! Your dog doesn’t have to be perfect, mine certainly aren’t, and you don’t have to be a perfect owner, I’m definitely not, but I care and you care. Apparently, that makes all the difference.

Sometimes affection is not just licks to the face. 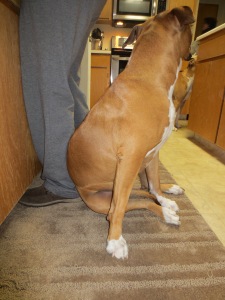